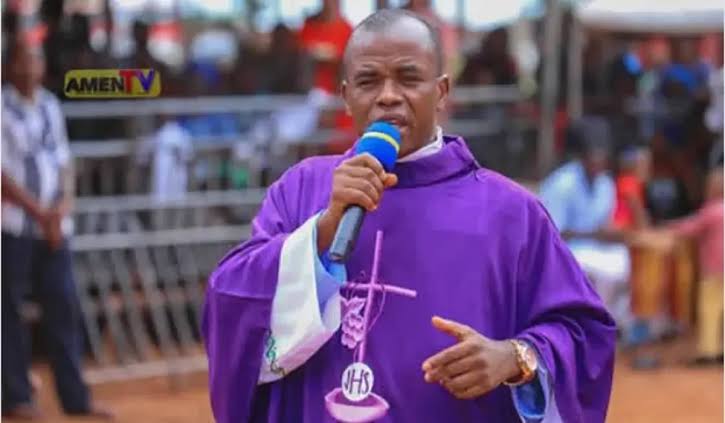 A Catholic Priest and Spiritual Director of Adoration Ministry, Enugu, Reverend Father Ejike Mbaka has called on the National Assembly to impeach President Muhammadu Buhari if he fails to resign for his inability to curb the rising insecurity in the country.

According to Mbaka, it was sad that Buhari could maintain graveyard silence in the midst of the killings and deaths in the country, insisting that he may have lost touch with reality.

The controversial Catholic priest made the call during worship on Wednesday evening in Enugu, insisting that no civilized leader would remain in power with the spate of violence and ugly deaths that have bedeviled the nation.

“How can people be dying, the chief security officer of the country will be sitting down without making any comment.

“Gunmen attacking people everywhere. Buhari should have resigned honorably following his failure as a leader. Let me tell you if it is in a civilized country, by now, President Buhari will resign with what is happening. So it is amazing that he has chosen to sit tight while people are dying anyhow.”

Noting that Nigerians are facing great difficulty created by poverty and insecurity, Mbaka said further: “Nigerians are crying because there’s no security in the country. The National Assembly should impeach the president if he doesn’t want to resign.”

Mbaka however warned the lawmakers that should they fail to impeach the president and begin to attack him; “…something worse than what they can never imagine will happen to the members.”

Igbo Governors Are More Intelligent Than You! IPOB Attacks Malami Over Comment On Kanu’s...

Nigeria’s Unity Is On Trial, CAN Says, Wonders Why Brutal Force Was Used On...