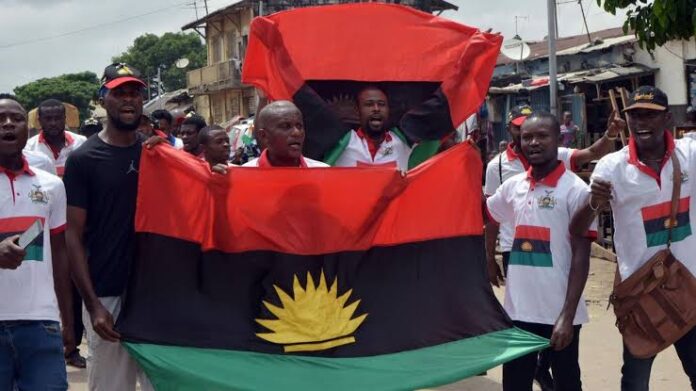 The Indigenous People of Biafra (IPOB) has said that the Commander of Ebubeagu in Imo, Ogwu (the Mayor of Mozambique) was not the one killed in a video that has gone viral.

The secessionist group, while condemning the activities of all criminal gangs in Orsuihiteukwa, Orsumoghu, Orsumenyi and Orlu axis in Imo State, claimed that said that IPOB and the Eastern Security Network (ESN) were not involved in the purported killing of the deceased.

According to IPOB, in a statement on Thursday by its Media and Publicity Secretary, Emma Powerful, the man in the trending video was killed because he rejected to be part of the infamous Ebubeagu militia group.

He said: “The young man was deceived that he was joining the ESN and along the line, he found out that he was recruited into a criminal gang and not ESN. He decided to escape from their camp.

“The criminal group started searching for him for the fear he might be a big threat and danger to them.

“The man was killed because he rejected to be part of the infamous group Ebubeagu militia that kidnap for ransom, snatches cars and killing of innocent citizens and continue blaming ESN operatives and IPOB volunteers.”

The group further revealed that some “dissidents” and enemies of Biafra freedom were busy sharing videos of the heinous crime in order to discredit and tarnish the image of ESN operatives and IPOB volunteers in the region.

“We, the global family and movement of IPOB wish to condemn the barbarity of all criminal gangs in Orsuihiteukwa, Orsumoghu, Orsumenyi and Orlu axis in Imo State.

“IPOB wants to clarify that the viral videos showing the execution of a man with a red T-shirt and a pair of jeans who was extrajudicially killed in Imo State is not Ogwu (the mayor of Mozambique) the Ebubeagu Commander in Imo State that masterminded the killing of 14 innocent youths in Awomanma, some weeks ago.

“It is important we elucidate that IPOB declared him wanted but the extrajudicially murdered person was not Ogwu, the Ebebubeagu Commander”, Powerful said in the statement.

Atiku, Others Must Do More To Unify PDP, Fayose Says, Insists Wike Is The...

Security Agents Are Mobilising Thugs To Attack Me In Court, Sowore Cries Out

I will Keep the Baby, Lady Allegdly Impregnated By Sammie Okposo...