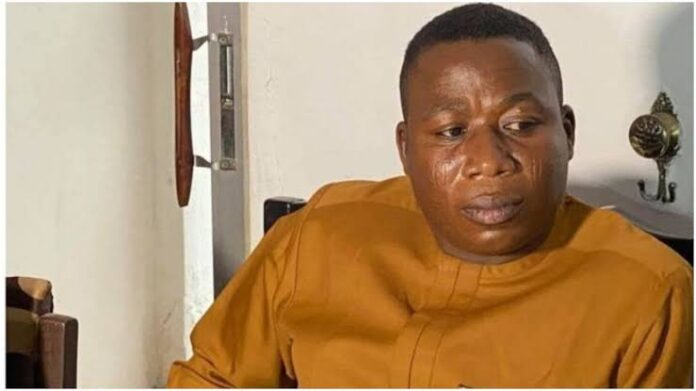 There had been reports making the rounds online that Igboho was released after the intervention of foreign diplomats and that he was already on his way to Germany.

Igboho was arrested on Monday night at an airport in Cotonou, Benin Republic while trying to board a flight to Germany with his wife, who is a German citizen.

Adeniran made the clarification in a zoom conversation organised by Heritage Multimedia TV monitored on Tuesday evening.

Adeniran, a pioneer Commissioner of Education in Osun State and former Director of Institute of African Studies at Obafemi Awolowo University, Ile-Ife, said: “I have just spoken with his lawyer. The lawyer has visited the location where he (Igboho) is been held.

“He was not allowed to see him (Igboho) but they confirmed to him that they are holding him in that location.

“He was asked to come back tomorrow (Wednesday) by 8:00am to see him.

“I asked him hope they are not going to play a funny game of secretly extraditing him, the lawyer told me it is not possible.

“We filed an application for political asylum for him over a week ago. With that in process, he cannot be legally extradited from Benin republic. I am very confident about that.

“I handle the application myself with the immigration lawyer and he assured me that since that application has been filed, he cannot be extradited. I think we should be rest assured that he will have the opportunity to see him tomorrow.”

Adeniran however queried the rationale behind the false reports of his release.

He said: “Why should people be putting out false information that he has been released which is injurious to this struggle and to the welfare and wellbeing of igboho?”

He also disclosed that four international lawyers from Benin Republic, Nigeria, France and Britain are on the case, adding that when they saw the trending news, they had to call him to confirm.

“When the lawyers saw the false information, they relaxed, I had to tell them it is false. So can you see the damage,” Adeniran added.