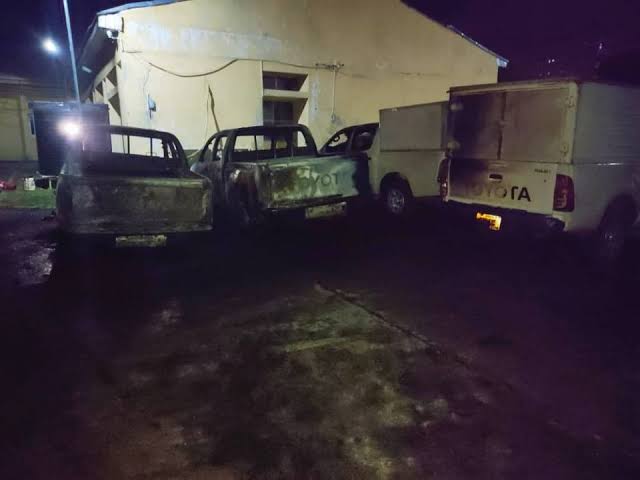 According to reports, the hoodlums, numbering about seven in a Mini-Bus, stormed the premises of the commission located near Enugu State Broadcasting Service at Independence Layout and set fire to six Hilux vehicles, five of which were completely burnt, while the sixth was partially destroyed.

The Sunday night attack is coming barely 48 hours after an INEC office was razed in Udenu Local Government Area of Enugu State.

The hoodlums, who attacked the state headquarters reportedly tried to set buildings in the premises ablaze but were resisted by armed security operatives guarding the premises. Though Some furniture in one of the offices were said to have caught fire before firefighters arrived.

Confirming the incident, the state INEC Resident Electoral Commissioner, Emeka Ononamadu, said some vehicles on the premises were affected but the office buildings were saved.

He said: “Firefighters were alerted shortly after the inferno was noticed and they rushed to the scene to prevent the fire from spreading to the main office complex.”

Father From Hell! Man Arrested For Beating Own Child To Death