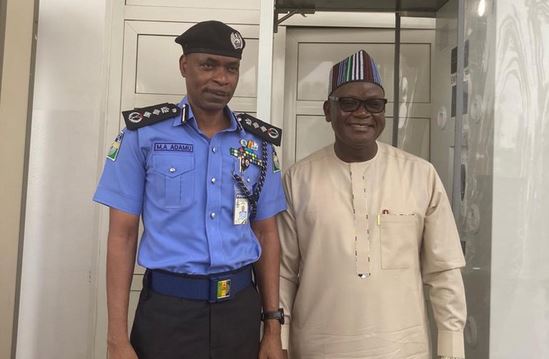 Governor Samuel Ortom of Benue State on Wednesday formally submitted a petition on the attempt to assassinate him to the Inspector General of Police, Mohammed Adamu, during a meeting with the IGP in Abuja.

NaijaNewsNow reports that gunmen, believed to be herdsmen attacked Governor Ortom and his aides when returning from his farm on the Makurdi-Gboko Road on Saturday.

The Force Public Relations Officer, Frank Mba confirmed the meeting of the Governor with IG Adamu in Abuja. He said: “It is true that Governor Samuel Ortom and IGP Adamu met this (Wednesday) morning in Abuja.

“The governor came to the meeting with a formal petition on the incident which he submitted to the IGP. IGP Adamu has treated the petition expeditiously. He has directed the Deputy Inspector-General of Police in charge of the Force Intelligence Bureau, Tijjani Baba, to continue investigation into the matter.

“You know that we (the police) have already started handling the matter even before the governor submitted the petition.”

Below The Belt! South-West PDP Hits Fani-Kayode, Says He Is A Political Liability, Begger...

Wanted By Washington, Julian Asange Gets Permission To Marry In British...