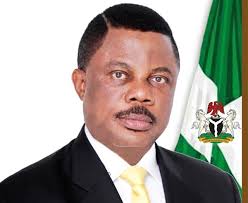 According to reports, about three houses were burnt and while nine persons, including a former Chief Judge in the state, were reportedly injured in the mayhem.

The Secretary to the State Government (SSG), Prof Solo Chukwulobelu, while announcing the curfew on Monday in a public service announcement, said the curfew was with immediate effect.

While stating that the curfew would run from 7pm to 6am until further notice, Obiano warned that security personnel were on strict orders to enforce the curfew.

The state Police Public Relations Officer, Ikenga Tochukwu, while stating that normalcy had returned in the area, said three persons died in the fracas.

Tochukwu said: “Normalcy has been restored in the area and our men are still on the ground to ensure the safety of life and property. So far, we have recovered three bodies that have been deposited at the morgue.”

It was gathered that Anaku and Omor, have been having a protracted crisis over land.

Out Of The Blues! Okotie Begs Tinubu, Atiku, Others To Step Down For Him...

2023 Presidency: Moghalu Slams Buhari’s Ministers For Failing To Resign In...