Home Scoop Go Ahead, Report Me To The Pope, Mbaka Dares APC 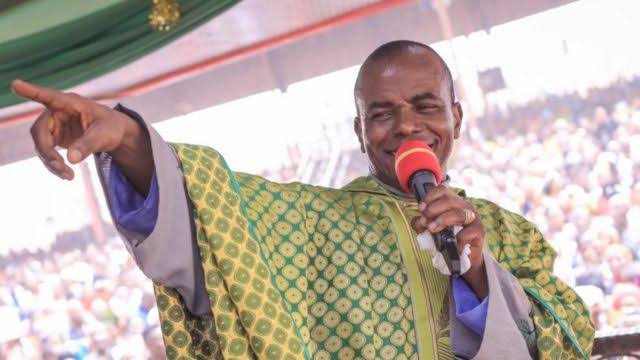 The Spiritual Director of the Adoration Ministry Enugu (AMEN), Father Ejike Mbaka has dared the All Progressives Congress (APC) to go ahead and report him to the head of the Catholic Church, Pope Francis, for calling for the impeachment of President Muhammadu Buhari.

It would be recalled that Father Mbaka, a former supporter of President Buhari, had called for his impeachment by the National Assembly if he failed to resign over the spate of insecurity in the country.

In reaction to the call by Mbaka, the APC threatened to report him to the Pope, while also asking him to leave political messages for politicians.

The presidency also claimed that Mbaka decided to move against the President because his request for contract as compensation for his support was not granted.

Reacting to the threat, Mbaka said the APC and any Nigerian willing to report him to the Pope should go ahead as the Vatican will surely clap for him if they hear that he is criticising Buhari on bad governance.

While speaking to members at the Adoration Ministry on Sunday, Mbaka said that the leaders of the “Catholic church will surely clap for me if they know my level of involvement in this country.”

He said further: ”Why I don’t want them to report to Rome is because If the Pope hears the extent of my involvement, they may give me a position I might not like.

”Don’t think you have a thing to report to Rome. If Rome hears that Fr Mbaka is challenging evil governance, Rome will clap for me

He was however silent on Garba Shehu’s allegation that he demanded for contracts as compensation for supporting President Buhari during a recent visit to the Aso Rock Presidential Villa, Abuja.

Man Lands In Police Custody For Impersonating Commissioner, Defrauding and Sleeping With 10 Ladies

Glossed Over! Senate Confirms EFCC Board Nominee Despite Discrepancies In His...