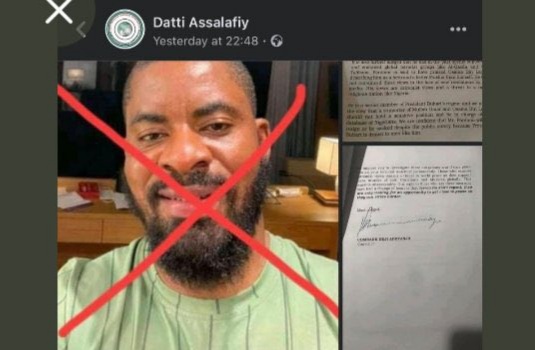 Activist Deji Adeyanju has come under attack and cursed by a follower of the Minister of Communication and Digital Economy, Isa Pantami, over his petition to the State Department of the United States of America, calling for Pantami to be put under terrorist watch.

Adeyanju’s petition is sequel to the raging controversy surrounding allegations that the minister has links with or supports terrorism and terror groups, as gleaned from his sermons as an Islamic cleric.

In reaction to the activist’s petition, one Datti Assalafiy wrote on Pantami’s verified Facebook page: “The non-Muslim, Deji Adeyanju, hates Islam and Muslims, supports the abuse of Islam and Muslims on his social media.

“He is one of the enemies of Nigeria’s peace that has won a contract to spread the #ENDSARS crisis on social media which has cost Nigeria more than N3 trillion.

“He is the one who has now written a letter of complaint to the US Embassy in Abuja, requesting that the United States place Sheikh Dr Isa Ali Pantami on a list of people responsible for terrorist activities around the world, and that the embassy accepted his complaint.

“No matter the fate and destiny, there is nothing to associate with these pagans who hate us all the time and their parents.

“O Allah, show this pagan one of your verses, may Allah grant him a long life in hardship and humility to witness the glory of Malam Isa Ali Pantami and the Muslims in Nigeria. Amen Yaa Hayyu Yaa Qayyum.”

In what shocked many Facebook users following Pantami’s page, the minister responded in Hausa language to the post saying: “Allah ya tsine masa alubarika” which means “May Allah rebuke his blessings.”

The comment from the minister outraged many, attracting over 400 angry reactions, leading the comment to be deleted.

In a face saving effort, a quick rejoinder, by Pantami’s Fcaebook handlers said the Minister’s account was hacked.

They said: “This account was hacked. Just recovered it. It is not being managed by Dr Isa Ali Pantami, but by some youth. Disregard any request, comment or message from it. Thanks! Management.”

Outraged Nigerians however failed to buy the hack narrative, insisting that the communication minister remains an unrepentant fundamentalist despite openly renouncing his support for terror groups.

Kano Govt To Present Charges Against Sheikh Abduljabar On August 18

IPOB Accuses Military Of Killing Its Members in Akwa Ibom And...