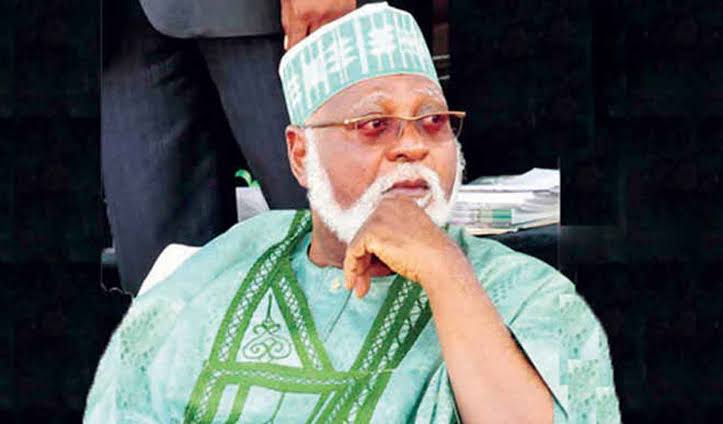 A former Head of State, General Abdulsalam Abubakar, has counselled the Federal Government to forget infrastructural development and divert all necessary funding to the security forces to secure peace in the country.

Abdulsalam also noted that if there is no peace, there cannot be a country, stressing the need for government to stop every unnecessary development across the country and focus on security.

The former Head of State said this when the Senate President, Ahmed Lawal, paid him a visit to commiserate with him over the death of the father of Senator Sani Musa, the Senator representing Niger East Senatorial District.

He said: “My suggestion is that due to the overstretching of our security forces, I think all the necessary funding should be given to the security forces. I suggest that we look at the unnecessary development issues in the country and do the needful to make life bearable and let us face this insecurity by diverting the necessary funding to secure peace in this country. If there is no peace, there will be no country.”

Speaking further, Abdulsalam prayed that those making life difficult for Nigerians would look at reasons why they need to give peace a chance.

While speaking during the visit, the Senate President appreciated the advice of the former Head of State, saying that the courage, resolve and determination of Nigerians would help the nation surmount its current challenges.

“Every single hand is needed on deck today. As leaders, elected or appointed, we have responsibilities and obligation to the citizens. We need the support of the citizens as well to solve the numerous problems that Nigeria faces today”, Lawan said.

2023: Why We Endorsed Tinubu For President  – Afenifere

Deadly Libido! Man Beats Wife To Death In Edo For Denying Him Sex

Dele Momodu Reveals What He Discussed With Remi, Why He Cannot...