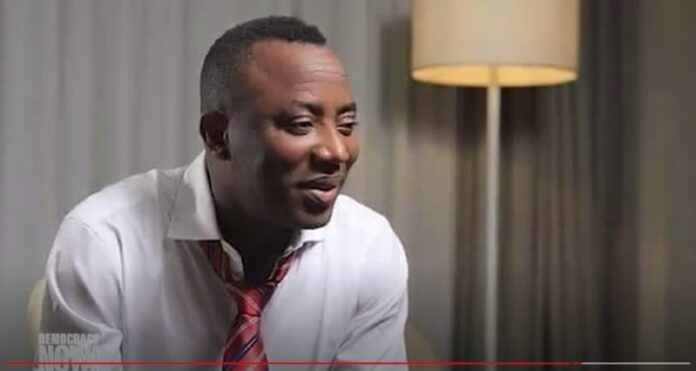 The Publisher of online news medium, Omoyele Sowore has been injured by a teargas canister fired by a female police officer at a rally at the Unity Fountain, Abuja on Monday morning.

According to reports, the politician was preparing to hold a rally with some associates when the incident happened, with a video footage showing Sowore falling on the ground after the canister hit him.

Though details of the attack were sketchy, an activist, Deji Adeyanju, confirmed the incident, adding that he has been rushed to a hospital for medical treatment.

A lawyer, Inibehe Effiong, who said he watched the shooting live on Facebook, tweeted: “@YeleSowore has just been shot by a female police officer at the Unity Fountain in Abuja.

“The criminal officer is said to be an ACP. I watched Sowore being shot live on Facebook.”

However, the spokesperson of the FCT Police Command, Mariam Yusuf, denied that Sowore was shot, saying there was no record of the incident.

According to Yusuf in a statement on Monday, operatives simply resisted protesters “who went on the rampage.”

“The FCT Police Command wishes to debunk the viral message in some sections of the social media purporting that Omoyele Sowore was shot by a female Assistant Commissioner of Police at the Unity Fountain.

“Contrary to the speculation, police operatives professionally restored calm at the Unity Fountain following attempts by a group of protesters to incite public disturbance.

“The protesters who went on the rampage were resisted by police operatives in order to prevent them from causing a breakdown of law and order. There is no record of such incident as at the time of this release”, She said.

APC National Chair, Adamu Expresses Worry Over Defection Of Senators From The Party