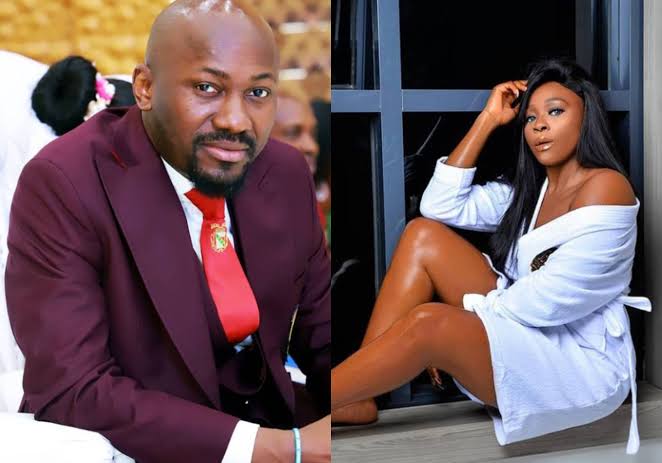 The General Overseer of Omega Fire Ministry (OFM) Apostle Johnson Suleman, on Sunday, failed to address the allegation by a Nollywood actress, Chioma Ifemeludike that they had an affair years back.

The preacher, while addressing his congregation, rather said he is not bothered by those attacking him on social media over the allegation.

NaijaNewsNow reported that Chioma Ifemeludike alleged that she slept with the popular preacher for money and the memory has continued to torment her.

“Why are you encouraging a man that is not discouraged? I’m upset since yesterday. I saw messages saying that I should not worry.

“Read my countenance, when you see me moody you can encourage me. Do I look like somebody who needs encouragement? I’m not discouraged at all and I’m not angry at those insulting me on social media,” he said.

The controversial clergy, who has been in the media lately over his miracle alert videos, said he remained focused on his God-given assignment, stating his abusers were only reacting to what they read online.

“You can’t know me and not like me, it’s impossible. Keep doing what you are doing and I’ll keep doing what I’m doing. I must do the work of he that sent me.”

The preacher further said that he has ignored all the videos made against him.

“What I don’t see cannot affect me. Somebody sent me a video from a blog yesterday, that was the last time it was on my phone. I guard my heart so that I can have fellowship with God. Stop all these rumors and gossips. What will not encourage me I don’t give attention to it,” Apostle Suleman said.

Unity Bank Embroiled In Another Scandal, As Civil Servants Shut Down Operations Over Diversion Of Funds (Photos)

Not Now! Bawa Says Nigerians Will Know The Identities Of Terrorism Sponsors At The Right Time

IGP Adamu Indicts State Govts, Says They Are Not Cooperating With FG On Security

Brewing Crisis! Pay Compensation Or My Followers Will Bring Down Your State, Sheikh Dahiru...

Bitten By The Bug? Umahi Toes APC Line, Blames Past Leaders For Insecurity

20 Years After, FEC Approves Reintroduction Of Tolling On Federal Roads