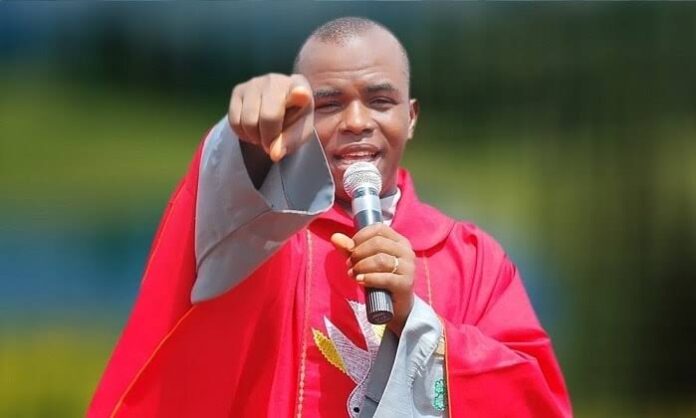 The ban is coming the wake of controversies that trailed Mbaka’s outbursts against the presidential candidate of the Labour Party, Mr Peter Obi, in which he labelled the former Anambra State Governor a stingy man.

The Enugu Diocese of the Catholic Church had distanced itself from Mbaka’s utterances, accusing him of contravening sections of the Canon Law, forcing Mbaka to tender a public apology to Peter Obi and his followers.

Despite the apology, the Bishop of the Diocese, Bishop Calistus Onaga, in a letter he personally signed, and addressed to ‘All the Clery, Religious and Lay Faithful in the Catholic Diocese of Enugu’, banned them from having anything to do with the Adoration Ministry.

He said in the letter that Mbaka, having refused to heed to the Church’s persistent directives, “and in fulfillment of my pastoral duties as the Chief Shepherd, I hereby prohibit all Catholics (clergy, religious and lay faithful) henceforth from attending all religious and liturgical activities of the Catholic Adoration Ministry until the due canonical process initiated by the Diocese is concluded.”

Bishop, who said that his decision was based on the fact that Mbaka’s teaching and utterances were not consistent with the teachings of the Catholic Church, however enjoined “all Christian faithful to keep praying for Fr. Mbaka.”

The letter reads: “In the light of the happenings in the Catholic Adoration Ministry Chaplaincy Enugu; capable of undermining the Catholic faith and teachings; and after several fraternal corrections and admonitions to Fr. Camillus Ejike Mbaka, the Chaplain of the Ministry; and after having given him pastoral directives and guidelines for the Ministry Chaplaincy, which he persistently violated;

“And in fulfilment of my pastoral duties as the Chief Shepherd with the obligation to promote and safeguard the Catholic faith and morals in Enugu Diocese, I hereby prohibit all Catholics (clergy, religious and lay faithful) henceforth from attending all religious and liturgical activities of the Catholic Adoration Ministry until the due canonical process initiated by the Diocese is concluded.

“I enjoin all the Christian Faithful to keep praying for Fr. Mbaka and the Catholic Diocese of Enugu as I entrust him and the Diocese to the maternal care and protection of the Blessed Virgin Mary, Queen of the Apostles.”