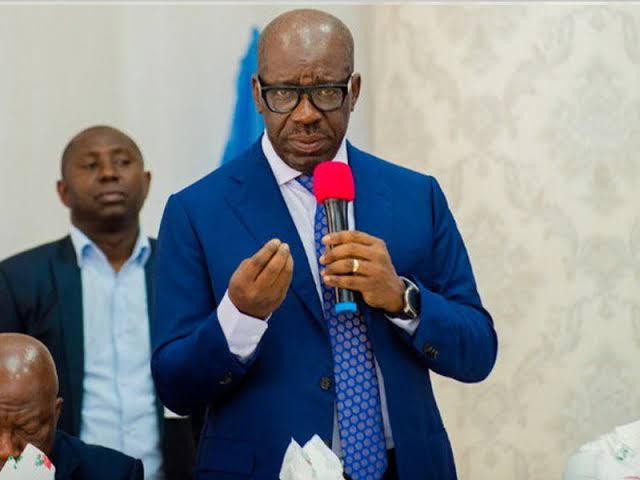 The crisis currently rocking the Edo State chapter of the Peoples Democratic Party (PDP) may be far from over anytime soon as it has claimed its first victim, Mr. Tony Aziegbemi, who has been suspended from office as the Chairman of the party in the state.

Aziegbemi’s offence was linked to his accusing the state Governor, Godwin Obaseki, of marginalising the PDP in his political appointments so far and also making moves to sack the party structure in the state.

The spokesman for the party in the state, Chris Nehikhare, in a statement on Wednesday, said the suspension was based on the decision State Working Committee (SWC) of the party.

He said: “The SWC suspended the chairman for gross misconduct by brewing unnecessary tension and disunity among party members in the state.

“The suspension was ratified by two third of the SWC members at the meeting on Tuesday in Benin.

“The SWC resolved in a motion that Aziegbemi should step aside until the determination of the allegations against him.

“Among the allegations, Aziegbemi was accused of gross misconduct by brewing unnecessary tension and disunity among party members in the state in a manner akin to bringing the party into disrepute.

“This decision, hard as it is, is designed to bring sanity back to our party.

“It would be like ignoring the elephant in the room if we ignore this macabre dance as Edo people have watched in utter amazement and disappointment how Aziegbemi has been roped and entangled by his actions and unfortunately too, his inactions in the management of the affairs of the party.”

Prior to his suspension, the embattled chairman had accused Governor Obaseki of trying to dissolve the party structures at all levels in the state and also of appointing only his friends and those who crossed from the All Progressives Congress (APC) to PDP with him.

In the letter to the national headquarters of PDP, signed by Aziegbemi and the Secretary of the party in the state, Hilary Otsu, the Edo PDP, as the duo claimed to be writing on behalf of the expanded SWC, also accused the national leadership of the party of failing to have either a verbal or written agreement with Obaseki on how offices were to be shared after winning election, during negotiations for his joining the party.

“The expanded State Working Committee and Local Government chairmen of the Edo State PDP reject in its entirety, the proposal to dissolve the legitimately elected executive committee members of the PDP at the Ward, Local Government and State levels.

“We also condemn totally, the convening of such a meeting aimed at ambushing our State Chairman, who is constitutionally empowered to call such a meeting.

“We hereby reiterate to the National Executive Committee of our party that the issue of dissolution of executive committees in Edo State is subjudice and it will be an act of contempt of court to revisit it.

“The genesis of this looming crisis results from the acquiescence of the National Working Committee members who negotiated Mr Obaseki’s movement to the PDP.

“(The committee did not) reach a verbal or written agreement on the integration of the new members, vis a vis, the sharing of appointments, after the elections had been won.

“We, therefore, condemn Governor Obaseki for re-appointing his former Secretary to the State Government (SSG) without any consideration for the ‘legacy PDP’ he joined.

“To this end, they have consistently sang a tune of ‘harmonisation’ ever since Obaseki was sworn in, now that he has the “yam and the knife”.

“We have resolved strongly that if any harmonisation must take place, it must start from the Governor’s office, where his Deputy Governor should resign and a deputy nominated from the old PDP is sworn in.

“This can be a spring board for broad harmonisation across the state party organs.

“The proposed dissolution and, or, harmonisation are designed to hold Edo people and the PDP to ransom by the Obaseki-led administration. We will not accept this.

“Edo people voted for PDP and Godwin Obaseki to deliver the dividends of democracy to them.

“If he wishes to appoint only his friends and former APC colleagues in his cabinet and sundry positions and leave out the legacy PDP members, so be it.

“We, the state PDP leadership will not accede to any form of harmonisation that has no backing or interpretation in our party constitution”, the letter read in part.

The suspension of the Aziegbemi has brought to the fore the fact that all may not be well within the party in the state and that the marriage of convenience contracted when the APC shut out Obaseki from the governorship race in 2020, was shoddy and not properly put together, appearing that both sides were too eager to win the election without looking at the likely challenges their forced union may face afterwards.

An appeal on Thursday by the acting State Chairman of Edo PDP, Harrison Omagbon, to members of the party to be calm over the suspension of Aziegbemi, is an indication that there is currently an ongoing rumbling in the party.

Omagbon also indicated that the party may at the moment be in disarray, when he said in his Thursday statement that his job was to unite the party in Edo.

He said: “My task as acting chairman will be to unite our party and ensure that the unity which our electoral victory bestowed on us is sustained and enlarged to the glory of God.”

“On behalf of the state working committee, I am deeply sorry.

“However, we cannot wish away our party’s sanctity, integrity and pride on the altar of parochial sentiments.

“That is why we have set up a committee to investigate and unearth the facts of these allegations.

“My dear party faithful, we are at a very auspicious time in our democracy.

“It is on record that our governor is counted among those delivering the dividends of democracy to the people.

“We cannot engender a party culture of corruption and flagrant disregard for the wishes of the people.”

The situation in the PDP in Edo is a reflection of the larger problem facing politics in Nigeria, where the focus is largely on grabbing power and not focusing on the details. Nigerian politicians do not have any problem entering into alliances, no matter how faulty, if it can guarantee their emergence as winners in a political contest.

This has continued to heat up the polity and endanger democratic governance, as most times, the actors are preoccupied with fighting for survival and grossly distracted.

The Edo PDP must do all it can to salvage the situation to ensure that it does not play into the hands of the opposition in the state, while Governor Obaseki must also show gratitude to the party that offered him solace in his time of need, by ensuring that the old members of the PDP in the state are given a sense of belonging in the governance of the state. An attitude of winner takes it all or sidelining those who worked with him outside his core friends and loyalists, can only make his second term in office even more problematic than what he encountered during the first.

Corruption Reporting Made Easy As US Consulate, Group Float ‘ReportMagoMago.com’

‘I Deserve To Be Locked Up’, Man Jailed 205 Years For Killing Five Family...

I chose Who Can Deliver! Atiku Speaks On His Choice Of...

CSOs Raise Alarm Over Internal Wranglings In The Military, Say It...