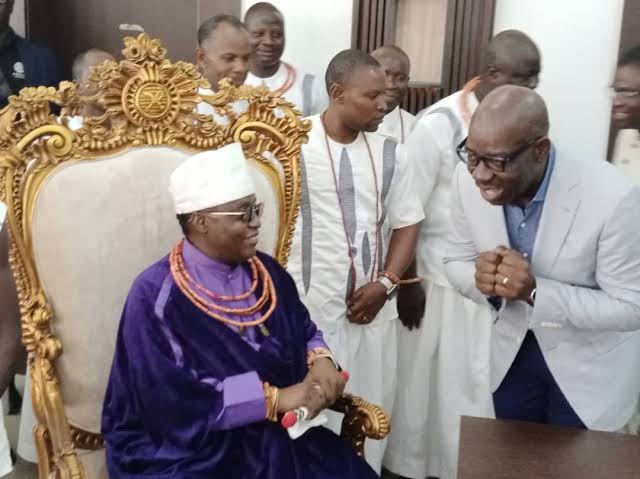 Governor Godwin Obaseki of Edo State may have been cowed by the strong stance of the Oba of Benin, Oba Ewuare II, over the return of the stolen Benin artifacts from Germany.

The Oba and Governor Obaseki have sharply disagreed on which institution, between the royal palace of Benin and the state government should take custody of the precious artifacts.

While the palace wants the artifacts to be housed in the Benin Royal Museum to be specially built for that purpose within the palace, Obaseki insisted on housing it a yet to be built Edo Museum for West African Arts in Benin, the Edo State capital.

Piqued by Obaseki’s seeming recalcitrant on the issue, the Oba, in a strong worded statement last week, asked the Federal Government to take custody of the artifacts until the museum to be built within the palace is ready. He also asked for prayers for the governor.

The monarch said: “While anticipating the return of the looted artefacts from Europe, I want to note that attempts to divert the destination or the right of custody of the artefacts is not in the interest of the people of Benin Kingdom, to whom the Palace of the Oba of Benin provides leadership. The looted artefacts awaiting repatriation from Europe are the cultural heritage of the Benin Kingdom created by our ancestors and forefathers within the traditional norms and rites of the kingdom.

“They are not property of the state government or any private corporate entity that is not a creation of the Benin Kingdom. The right and only legitimate destination for the artefacts to be repatriated as already pronounced by my father is under the aegis of the Benin Royal Museum that will be sited within the precincts of the Palace of the Oba of Benin, from where they were looted, and also, the proper traditional institution that is also the custodian of all the cultural heritage of the Benin Kingdom.

“The palace, therefore, strongly advises that anyone, group, organisation, or government – national and international – that is dealing with any organisation or artificial group in the process of returning the looted artefacts from the Benin Kingdom would be doing so at their own risk and against the will of the people of the Benin Kingdom.”

The monarch further said he was surprised to read Obaseki’s letter to the palace wherein a new museum was being proposed, and which would be funded and executed through the vehicle of Legacy Restoration Trust Ltd.

He said: “I informed him (Obaseki) that Oba Ewuare II Foundation had been registered with the Corporate Affairs Commission and had worked out a framework for not only receiving the artefacts but also building a modern structure – the Benin Royal Museum – within the precincts of the palace and that land has been secured for the building of the Benin Royal Museum under the supervision of the traditional institution.

“But for reasons best known to him, the governor has gone against the understanding, given recent events. As a matter of fact, the people of Benin Kingdom and other stakeholders, especially the Benin Dialogue Group, had at different meetings endorsed the Benin Royal Museum to be built within the palace, as well as endorsing the Oba Ewuare II Foundation for fundraising and other requisite administration processes.

“We wish to use this medium to call on the Federal Government to take custody of these artefacts on behalf of the palace until the Benin Royal Museum is ready for their collection. Under no circumstances should the custody of our age-old artefacts be handed to any privately contrived entity like Legacy Restoration Trust.”

Oba Ewuare II also advised Obaseki to review his approach of using the private vehicle of Legacy Restoration Trust Ltd and the Edo Museum of West African Art and see how he could “genuinely collaborate with the Oba’s palace in accordance with our original understanding. We thank the German government for its interest and willingness to return the Benin artefacts,” the monarch said.

“Perhaps, there is a bridge or gap in communication, not on our side but on the side of the state governor, Obaseki, who I insisted we should pray for. We need prayers for a peaceful resolution of these misunderstandings,” Oba Ewuare II added.

Jolted by the hard position of the Oba, and the likelihood of the currently brewing war between him and the palace to escalate, the Edo State Government, on Monday, released a statement that sounded, not just conciliatory but one born out of intimidation and jittery submission.

“It is concerning that the statement appears to have created the impression that there is a major conflict between the interests of the EDSG and His Royal Majesty with regards to the laudable national milestone of having our highly valued artefacts returned home to Nigeria.

“The Government of Edo State and the Governor have always acted transparently and in consonance with existing Federal and State laws in all matters relating to the proposed return of the artefacts and monuments.

“The actions of the government thus far on this issue have been driven by selfless, patriotic considerations and in the best interest of Edo State and Edo people.

“The Governor of Edo State, His Excellency, Mr. Godwin Obaseki, has displayed and will continue to display immense respect for our traditional institutions and therefore will continue to make effort to secure a private audience with His Royal Majesty to discuss his concerns.

“The Governor has consequently ordered that on no account should anyone, whether in government or acting independently, engage in disrespectful exchanges and/or altercation with our revered Royal Majesty and the Benin Royal Palace.

“Governor Obaseki, meanwhile, expresses his gratitude to the President of the Federal Republic of Nigeria, President Muhammadu Buhari (GCFR) and Minister of Information and Culture, Alhaji Lai Mohammed and other officials of the federal government for their patriotic and tireless efforts that have brought us to the verge of this eagerly anticipated achievement which has remained elusive for over a century.

“While thanking and congratulating the Federal Government, the President, the Minister, the Royal Palace of the Oba of Benin and all stakeholders who have contributed to the successes so far recorded in this endeavour, the Governor assures that he will continue to work assiduously with all local and international stakeholders for the eventual and final return of these valued records of our great and glorious heritage back to Benin City for the benefit of ALL Edo people, Nigerians and the black race.”

Obaseki’s capitulation may however not be unexpected. This is because the governor, who has fought many wars in his reign as Governor of Edo State, must be battle weary at the moment.

With his long drawn battle with his erstwhile boss and friend, Adams Oshiomhole and the All Progressives Congress, and most recently, a section of the Peoples Democratic Party (PDP) in Edo, leading to the suspension of the state party chairman, Governor Obaseki deserves a less rancorous stay in office in his second term.

Obaseki, as a Benin man, must have also advised himself that you don’t fight the Benin palace and come out unscathed. He must have also learnt from the experience of another highly placed Benin chief, Gabriel Igbinedion, who many believe have not recovered from his faceoff with the palace.

Whatever may be Obaseki’s reason for capitulation, it is sheer wisdom not to fight at all times, it is even greater wisdom to choose your fights and opponents wisely!

Buhari, In Last Independence Day Speech, Says He Shares The Pains Of Nigeria

I Can Never Ditch Wike, Gov Ortoms Clarifies His Stand On...

Constitute NDDC Board In Seven Days To Avert Total Breakdown Of...