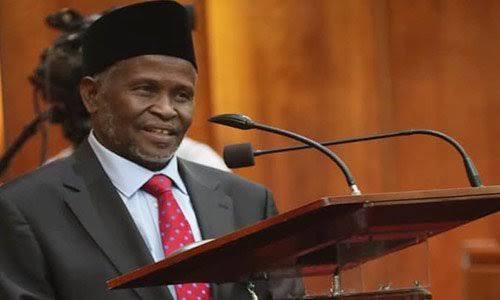 The Chief Justice of Nigeria (CJN), Justice Tanko Mohammad, has reacted to a leaked petition from Justices of the Supreme Court of Nigeria, in which allegations were raised against him.

The CJN, who denied the allegations, stated his own side of the story in a statement by his Senior Special Assistant (Media), Ahuraka Isah, titled, ‘Re: State Of Affairs In The Supreme Court And Demand By Justices Of The Supreme Court.

According to Justice Mohammad, the Supreme Court justices were provided with SUV vehicles, cars and accommodation.

“Accommodations are being gradually provided for the few that are yet to get. There is none of the Apex Court Justices without SUV and back up cars. If any of them were purchased but refurbished, the external and internal auditors are here in the court to take those that bought them up over it,” the CJN said in the statement.

Reacting to allegation that there was no electricity in the courtrooms, the statement said: “The high cost of electricity tariff and diesel are national problem. The Chief Registrar might have budgeted for N300 per litre but diesel is now selling for over N700 per litre and therefore has to find a way around it without even bringing it to the attention of the CJN. But there is no way the generator would be put off if the Court is sitting.

“The amendment of court rules is on the process, it has to be critically reviewed to avoid conflict with the constitution and other extant laws. Not all the CJN has reviewed the rules in the past. Within the three years, his brother Justices mentioned came the pandemic and the judiciary workers’ strike.”

Justice Mohammad also denied an allegation that the justices had no Internet to do their work.

“The internet services have been restored to Justices’ residences and chambers, just as some allowances have been paid to them. The CJN held a meeting with his brother Justices last Thursday and another one is due to hold this week.

“The general public should be rest assured that there’s no hostility or adverse feelings amongst the Justices of the Supreme Court, as everyone is going about his normal duty,” he added.

The Allegations
14 Justices of the nation’s apex court, in the leaked petition, had accused the CJN of abandoning his responsibilities and diverting funds meant for the running of the Supreme Court.

They also accused the CJN of receiving their demands without acting “after several persistent requests” to hold a meeting which was finally held on March 31, where a welfare committee was set up.

“Your lordship received and ignored these demands since 24th March 2022.

“In the past justices were nominated to attend two to three foreign workshops and training per annum with an accompanying person for reasons of age,” the memo stated.

Continuing, the Justices said: “Since your lordship’s assumption of office, justices only attended two workshops in Dubai and Zanzibar. They were not accorded the privilege of travelling with accompanying persons as was the practice.

“Your lordship totally ignored this demand and yet travelled with your spouse, children and personal staff.

“We demand to know what has become of our training funds, have they been diverted, or is it a plain denial?

“Your lordship may also remember that the national assembly has increased the budgetary allocation of the Judiciary. We find it strange that in spite of the upward review of our budgetary allocation, the Court cannot cater for our legitimate entitlements. This is unacceptable!”

They also lamented that the Supreme Court clinic “has become a mere consulting clinic”.

“Drugs are not available to treat minor ailments. There is a general lack of concern for justices who require immediate or emergency medical intervention,” part of the petition read, while also complaining that they lacked electricity to work at him.

They recalled that the CJN had in an internal memo stated that “electricity would be supplied to the court between the hours of 8am and 4pm daily, for lack of diesel”.

“The committee also requested for the restoration of our monthly Internet allowance, because we require uninterrupted Internet service in order to have access to materials online to write our judgments.

“With regard to justice’s vehicles, several are due for replacement, while the new Justices have not received their full complement of vehicles to date. Moreover, some of the vehicles supplied to the Justices are either refurbished or substandard.

“Your lordship with all due respect, this is the peak of the degeneration of the court; it is the height of decadence, and clear evidence of the absence of probity and moral rectitude.

“Your lordship, this act alone portends imminent danger to the survival of this court and the Judiciary as an institution, which is gradually drifting to extinction.

“It is either you quickly and swiftly take responsibility and address these burning issues or we will be compelled to further steps immediately. May this day never come”, the petition added.

I will Solve Nigeria’s Leadership Problem If Elected President – Wike