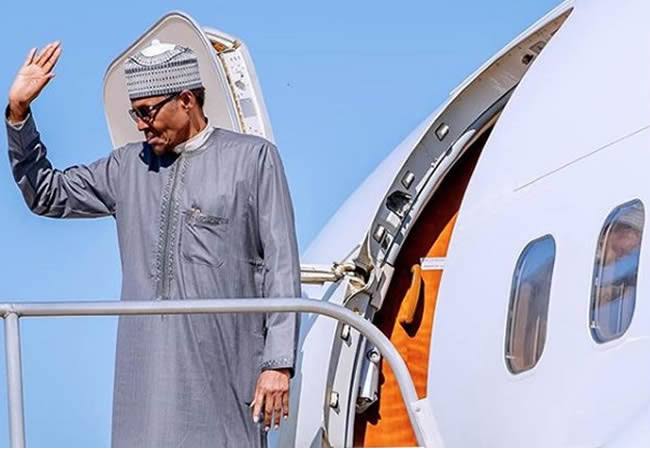 On Thursday, President Muhammadu Buhari departed the shores of Nigeria for the United Arab Emirates (UAE) in the latest of his long list of foreign travels.

This time around, the President left the country on a condolence visit to the UAE over the death of its leader, former President Sheikh Khalifa bin Zayed Al Nahyan, who passed away at the age of 73.

President Buhari, according to a statement by his Senior Special Assistant on Media and Publicity, Garba Shehu, will also use the opportunity to congratulate the new president, Sheikh Mohammed bin Zayed Al Nahyan.

Others on his entourage include the National Security Adviser, Babagana Monguno and the Director-General, National Intelligence Agency, Ahmed Rufai.

Buhari’s latest trip comes at a time of national gloom and uncertainties, a time when deaths have become so cheap, with insurgents, bandits, kidnappers, ritual killers, unknown gunmen and other sundry violent criminals laying a siege on Nigerians and the Nigerian nation.

There is virtually no day that passes without reports of violent attacks in parts of the country, with deaths recorded. But in all of these, President Muhammadu Buhari never thought it wise or expedient to visit the victims of such violence or the family of deceased victims, in a show of solidarity with them.

It is still a source of concern and amazement that President Buhari could not do more than the usual half-hearted condemnation of the callous and barbaric murder of Deborah Samuel, despite the outrage that greeted her killing by cold-hearted criminals in Sokoto, who hide under the cover of religious fanaticism, to take the life of a young lady, whose only known crime is leaving the comfort of her homestead to seek knowledge and be educated.

Our President, who claimed not to be for anybody but for everybody, could not spare a few hours to commiserate with Deborah Samuel’s family in nearby Niger State, but ‘hopped’ into a presidential jet, with a retinue of government officials and several aides to the UAE to condole with them. This is certainly disheartening!

The question many will readily ask is, how many scenes of disasters, violent attacks and mindless killings has Buhari visited since 2015 when he became president? How many victims or family of victims has he visited to condole? How many times has personally spoken out against the several violence, attacks and the likes that have taken place under his watch?

It is on record that President Buhari, since he assumed office, has never personally taken charge of condoling Nigerians whenever the now normal killings occur, but choose to do so through Garba Shehu, his Senior Special Assistant on Media and Publicity, which most times are watery, not soothing and uninspiring for the hurting.

Truth be told, Buhari and his administration has just defiantly spit on the graves of Nigeria’s victims of insurgency, banditry armed robbery, kidnappings gone wrong; graves that litter the length and breath of the country.

Buhari’s condolence trip to the UAE is a spit on these graves that confirm the most times uncomfortable but true saying that the lives of Nigerians do not matter, at least to their leaders!

Leaders who are concerned about their people, value them and their lives, will first show concern and take concrete steps in that direction before making unnecessary and hypocritical trips to foreign lands just in the name of condolences. Same trips they forbid here in their backyard!

No Extension Of Deadline For Nomination Of Gov, Assembly Candidates, INEC Warns Parties

2023: How I Changed My Mind About Not Contesting For President – Orji Kalu

Poor Nigerians To Be My Focus Till End Of My Tenure, Buhari Says In...

You Are Only Indicting Buhari! Obiano Blasts APC For Politicising Anambra...