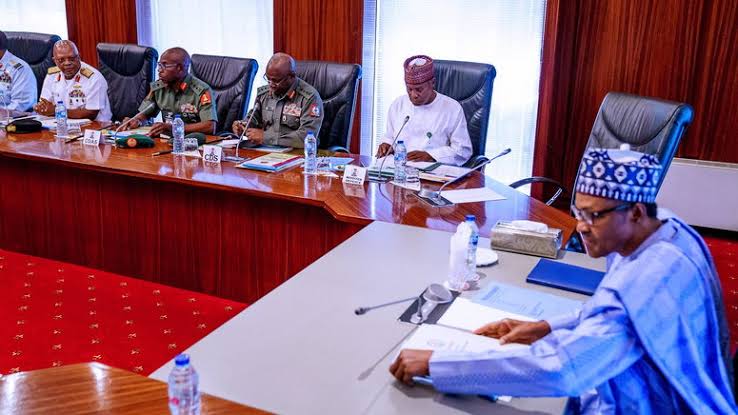 President Muhammadu Buhari on Tuesday met with service chiefs before embarking on a medical check-up trip to the United Kingdom at the Presidential Villa, Abuja.

The Chief of Defence Staff, General Lucky Irabor; Chief of Army Staff, Lieutenant-General Ibrahim Attahiru; Chief of Naval Staff; Vice Admiral Awwal Zubairu; and Chief of Air Staff, Air Marshal Isiaka Amoo were joined by Vice-President Yemi Osinbajo; National Security Adviser to the President, Maj.-Gen Babagana Monguno (retd.); the Chief of Staff to the President, Ibrahim Gambari; Secretary to the Government of the Federation, Boss Mustapha, amongst others at the meeting.

NaijaNewsNow had reported that the Special Adviser to the President, Femi Adesina had said in a statement on Monday evening that the President Buhari is to embark on a medical check-up trip to London to be back in the second week of April.

Buhari Again Assures Nigerians Of His Commitment To Protect Them