Home Scoop Buhari Has Been Tolerating Rubbish From Some Nigerians, Masari Says 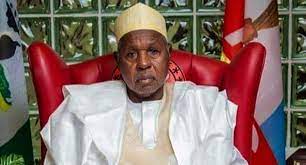 Katsina State Governor, Aminu Bello Masari on Sunday said President Muhammadu Buhari has been tolerating rubbish from some Nigerians, adding that the President has not failed Nigerians contrary to claims in some quarters.

The governor, who stated this during an interview with Television Continental, also insisted that “the rating of the President has not changed. Anybody saying that the rating of the Buhari administration has gone down should wait till when we would have an election.”

Speaking further, Masari noted that the gale of protests against the Buhari administration is expected in a democratic setting and does not mean that the president has failed.

“Protests are necessary in a democracy. Even in the best democracy in the world, people protest. The fact that we have democracy does not mean that people should not complain or protest.

“I don’t think Buhari has failed us, I think he has tolerated us. We once had a civilian president who couldn’t take the rubbish that Buhari is taking from some people”

Pastor Adeboye’s Son, Dare Dies In His Sleep At 42

My Small B**bs Saved Me From Sex Tape Scandal- Janemena