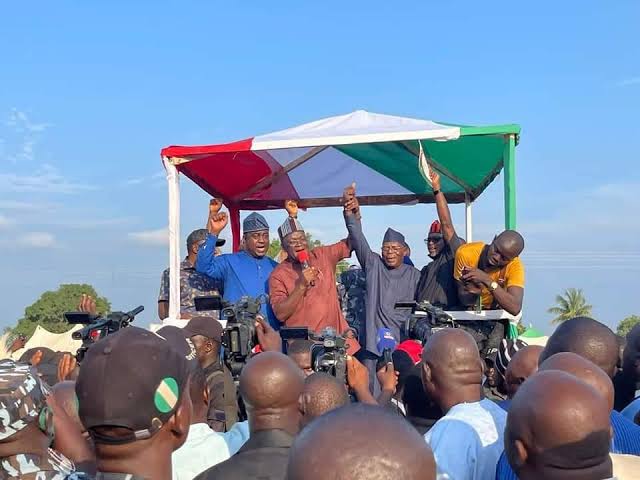 The membership strenght of the All Progressives Congress (APC ) in Benue State plunged further as Governor Samuel Ortom recieved new defectors from the party to the Peoples Democratic Party (PDP) in their thousands on Saturday.

Governor Ortom received the defectors at the Government House, Makurdi, just few days after more than 100,000 members of the APC in the Agatu and Kwande Local Government Areas of state defected to the PDP.

The new set of defectors, largely from Ushongo LGA, on Saturday, followed suit in moving to the main opposition party in solidarity with Governor Samuel Ortom who had called on members of other parties in the state to decamp to the PDP.

While receiving the throng of defectors, largely from Ushongo Local Government Area of the state at the Government House in Makurdi, Ortom said the mass defections were as a result of the failure of the APC led Federal Government in the protection of the lives and properties of the people of the state as well as the administration’s apathy to the plight of the people.

Terver Akase, Ortom’s Chief Press Secretary, in a statement on Saturday, qouted Ortom as that he was happy that the people had decided to dump the “fumbling and ineffective” APC, considering “all the attacks and killings by armed herdsmen that the state had witnessed, without genuine efforts by the federal government to tackle the challenge and also intervene in IDPs situation in the state.”

He also noted that the defections showed that “any Benue political party member still in the APC should check him or herself as the party at the center does not hold any future for them, and for Nigerians in general.”

The statement further qouted Ortom as saying: “As you can see, this is not the first time we will be receiving defectors from the APC and other parties. Is it not a clear indication that the APC at all levels, have failed the people of Benue and Nigerians in general? I welcome you with an open mind and I assure you that this administration will do everything possible to make your lives and that of your children better.”

Seyi Makinde Directs Flags To Be Flown At Half Mast, As He Mourns Former...

LAUTECH Final Year Student To Spend One Year In Jail Over $104,500 Fraud

Okei-Odumakin Drums Support Against Igboho’s Extradition Back To Nigeria