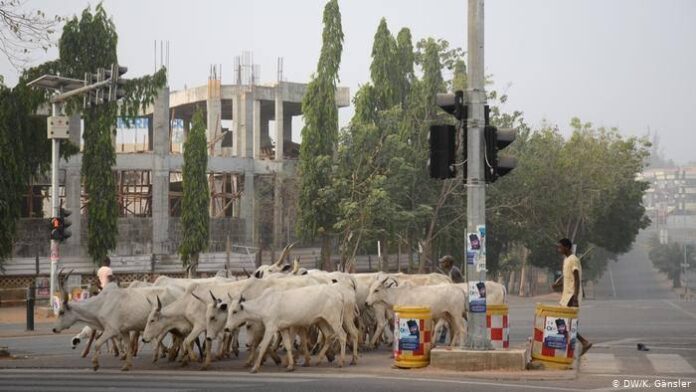 The Bayelsa State Government through the Bayelsa Livestock Management Committee (BSLMC) said on Tuesday that it has impounded 34 cows in Yenagoa for allegedly violating the state’s anti-open grazing law.

NaijaNewsNow gathered that the cows were impounded around the Bayelsa Palm Estate in Yenagoa, the state capital.

Mr David Alagoa, the state Commissioner for Agriculture and Chairman of BSLMC, who disclosed this in Yenagoa, while speaking with journalists, said the herders allegedly chose a convenient time in the night to graze, adding that some of the cattle were spotted grazing in farmlands.

Alagoa, who vowed that the committee would follow the anti-open grazing law to the letter in handling the issue, also maintained that the impounded cattle would remain in the custody of the committee until the herders paid the prescribed fine.

He said: “Over time, the communities around Bayelsa Palm Estate have become open fields for the cows because the herders are moving them and trekking around the area.

“We have been monitoring their movements over time and we decided to do a surprise hit.

Taliban Warns US Against Tampering With Afghan Frozen Funds

Kanu’s American Lawyer Threatens To Drag Nigeria Before ICC Over Violations of His Client’s...