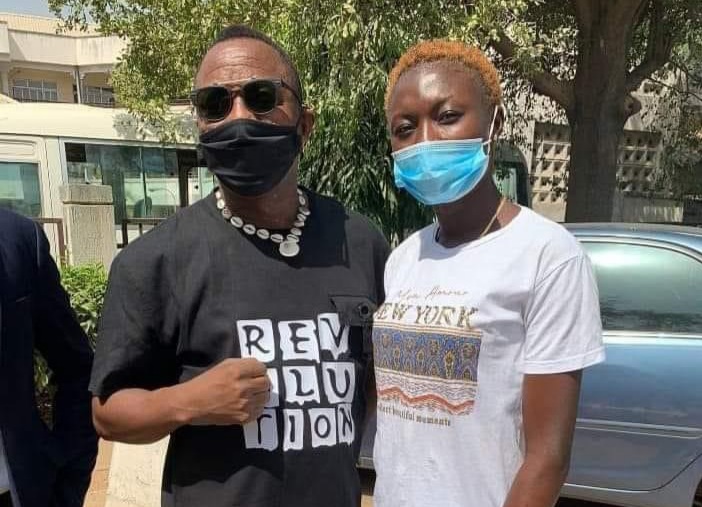 An associate of the Publisher of Sahara Reporters, Omoyele Sowore, Oluwatosin Adeniji, has dragged out Sowore, accusing him of pocketing a grant which she claimed Sowore applied for on her behalf in 2020, and without her knowledge.

Adeniji, also an activist and a well known associate of the the convener of #RevolutionNow, took to Twitter to call Sowore out, claiming he applied for the grant while she was police detention.

It would be recalled that Adeniji was arrested alongside five others in front of the National Assembly complex, Abuja, last November for staging an #EndSARS protest. They were however later released.

Tweeting with the handle @callmerahila Adeniji alleged that while she was in police custody last November, Sowore and his lawyer, Tope Akinyode, applied for the grant in her name, without her knowledge and the funds were not released to her.

She tweeted: “@YeleSowore Fast forward to January, I found out that a grant was applied for in my name, but since you @YeleSowore was in detention. I had to ask your lawyer @TopeAkinyode because I found out that he was the lawyer involved in the process.

“He admitted they you both applied for a grant in my name, but you didn’t tell me because he feels you want to make it a surprise and that he doesn’t know the current status and that I should find out from you @yelesowore.

“Since @topeakinyode said it was meant to be a surprise, I waited this long hoping you will inform me. But, you didn’t. I decided to take the bold step yesterday by demanding my grant funds from you.

“First, you admitted that a grant was applied for in my name through the late Innocent Chukwuma, but you are not sure he submitted the application till his death. You also raised concerns that it is possible that the late Innocent submitted the application and someone went behind your back to get the funds. This sounds absolutely unbelievable, especially coming from a man of your kind, who would cross seven seas to unravel a mystery.

“Also, you said to me that the reason I wasn’t informed was that you wanted @topeakinyode to open a human rights office in Abuja with the funds, but Tope revealed to me in our conversation this morning that there was a separate application for that purpose.

“When I insisted that I must get my funds from you, you then said it wasn’t you that applied but @topeakinyode did. I reached out to @topeakinyode immediately and he said he wrote a concept paper for a grant in my name on your instruction (to which I have evidences).

“When I further insisted on getting my grant from you, you and Tope connived to reverse your words and denied out-rightly that no grant was ever applied for in my name (whereas I have evidence of Tope admitting to it many time before this plotted denial).”

In his response, Sowore denied the allegation, insisting that he never applied for or received any grant in her name or on her behalf.

Sowore tweeted: “@callmerahila reached out to me earlier claiming a grant application was written in her name and I have confirmed to her that nothing of such existed. Further, I volunteered to refund her if any grant was collected on her behalf without her knowledge!

“Without prejudice to any further action she will take! Pls, note that this response is not intended as an attack on @callmerahila, she’s been a committed member of our movement over these years and assisted me in the last two years in particular while I was unjustly detained. Thanks!

“Lastly, if anyone knows of any foundation that issued a grant on her behalf without her knowledge, kindly reveal it to the public so that she can get her rightful entitlement. I never applied for or received any grants in her name or her behalf!.”