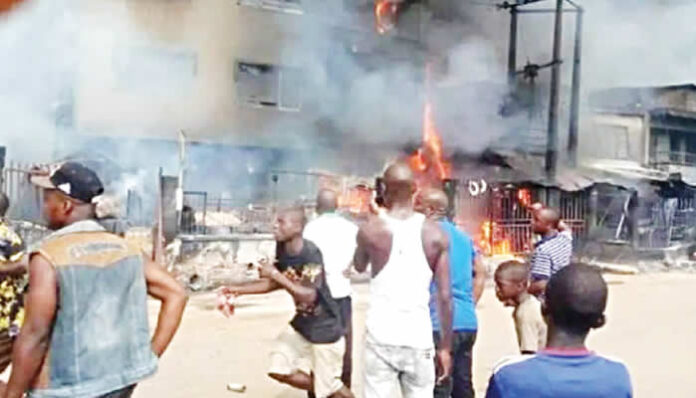 The Anambra State Fire Service has confirmed that 80 shops were destroyed in the fire explosion that rocked the chemical market in Onitsha Head Bridge.

This was disclosed in a statement on Wednesday by the Director of the Anambra State Fire Services, Martin Agbili, adding that the incident took place at the Science and Lab Line of Ogbo Ogwu Market and not the entire Ogbo Ogwu Market, Onitsha.

”It is really a terrible situation but the fire is under control now. The vibration from the explosions caused the collapse of some market buildings.

“A lot of safety measures have been taken to protect the entire market. There are casualties but we can’t ascertain the actual number of death and the injured”, he said.

The fire also destroyed goods and properties worth millions of naira.

It will be recalled that the fire started around 12.10pm on Tuesday when chemicals stored in one of the shops along the Progressive Science Union Line exploded.

According to reports, the incident led to a stampede in the heavily populated market, which resulted in the deaths and injuries.

FG Decribes Allegation Of Sponsoring Terrorism As A ‘Disgusting Distraction’