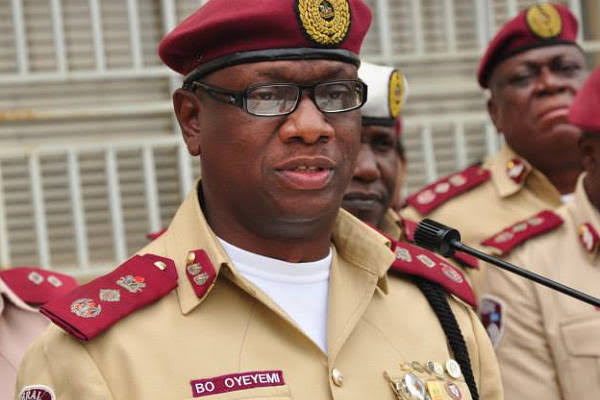 The Federal Road Safety Commission (FRSC) on Wednesday said there was a 27% reduction in the number of road crashes during its special patrol for the 2021 Eid-El-Fitri celebration that lasted between the 11th and 17th of May.

The commission, which revealed that a total of 5,511 offenders that committed 6,858 offences were also arrested during the period, attributed the feat to the rejigged operational tactics deployed during the special patroll, systematically organised to ensure free flow of traffic and safety of all travellers.

The Corps Public Education Officer, Assistant Corps Marshall Bisi Kazeem, who disclosed in a statement, said that a total of 92 road traffic crashes (RTC) were recorded as against a total of 117 in the same period in 2019 representing 27% decrease.

Kazeem further stated that the decrease recorded in RTC is largely attributed to several coordinated factors, among which are; the establishment of Station Offices in almost all the 774 Local Government Areas in Nigeria; intensified public enlightenment and sensitization campaigns held nationwide in collaboration with key stakeholders in the transportation sector and beyond; and effective patrol operations.

While analysing the operation, the Corps spokesman said that in the same period in 2019, out of the 117 RTCs that involved a total of 856 people in 2019, 54 people were killed in fatal crashes as against 43 in 2021, representing 26% decrease in fatality.

The statement also qouted the Corps Marshal, Dr. Boboye Oyeyemi as saying that the Corps now has a wider coverage due to the establishment of more FRSC Commands, Outposts, road side clinics and Zebra points, where reports are now relayed from different routes that were hitherto not thoroughly covered.

Oyeyemi explained that the comparison made with year 2019 period is due to the effect of the COVID-19 pandemic in 2020 which halted conventional operations adding that the reduction both in crashes and number of offenders apprehended is an indication that the public enlightenment efforts of the Corps is yielding results and road users are complying accordingly.

“The Corps is advancing steadily towards the actualisation of its corporate mandate of creating a safer motoring environment and eradicating RTC on our roads. This tempo will surely be sustained as all efforts have been adequately put in place to make the roads safer for all”, Oyeyemi said.