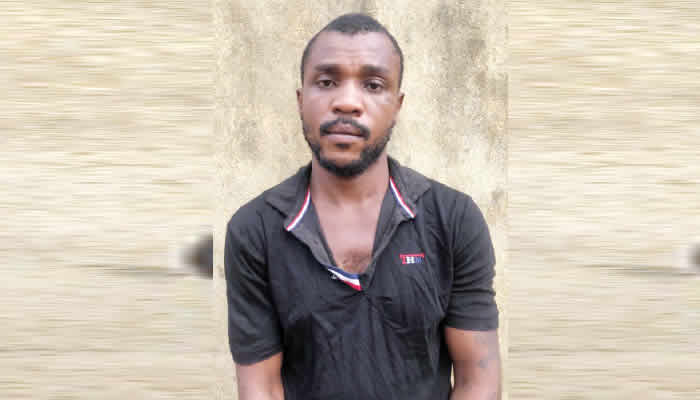 A 29-year-old revenue collector in the Umuleri area of Anambra State, Ifeanyi Ezinwa is being held by the police for killing his relative, 19-year-old Chukwuemeka Iloegbulam for demanding the repayment of a N100,000 debt.

Ezinwa was said to have asked the victim to meet him at a bush path near a secondary school in the town around 8.30pm on the pretence of paying the debt. He however had a sharp knife concealed in a loaf of bread which he aimed at Iloegbulam when he arrived.

The victim was however said to have managed to collect the knife in the ensuing altercation from Ezinwa and stabbed him. The suspect later overpowered and strangled him.

Ezinwa was said to have gone to the town, claiming that he and the deceased were attacked by robbers. He was however arrested and transferred to the State Criminal Investigation and Intelligence Department, Awka before it was later taken over by the Inspector-General of Police Intelligence Response Team led by DCP Abba Kyari, following a petition by the deceased’s family.

Narrating what happened at the office of the IRT, Ezinwa said: “I am married with three children. I dropped out of secondary school at SS2, months after my father died. I learnt how to drive and started driving commercial buses. It was not easy for me. About two years ago, some of our kinsmen invited me to work for the community. I am a revenue collector for the elderly men in the community.

“We have markets and every trader is expected to pay a certain amount of money. I spent part of the money I collected. I knew I would lose my job if they noticed a shortage. It was out of desperation that I approached Chukwuebuka (Iroegbunam) who ran a provision store in our village. He is my relative. We are from the same kindred in Umuleri. I borrowed N100,000 from him in December 2020 and promised to pay back on January 10. I could not meet up with the deadline and he kept disturbing me and threatened to report me to the Igwe (king).

“I made up my mind to silence him. I bought a loaf of bread and hid a sharp knife in it. I called him to meet me at Aguleri junction around 8pm. He came with an okada man and I asked the rider to go.”

According to the suspect, he took a walk with the victim on the pretence of going to where to get the money.

He said further: “There are bushes around the school and people hardly pass through the route. I immediately brought out the knife. He saw me on time and started fighting. He took the knife and stabbed me before I grabbed his neck and strangled it. I ran to the palace and the Igwe of Umuleri was not around. I told the security men I met that I was attacked by armed robbers and they asked me to go to the hospital for treatment.

“The next day, the chairman of security in our community came with the police and arrested me. They found Iroegbunam’s body but I insisted that we were attacked. I eventually told the police the truth. I cannot explain the devil that entered me.”

Security Of Lives And Property Must Be Prioritised For Nigeria To Move Forward –...

DSS Asks Nigerians To Be Calm Over Planned Terror Attacks