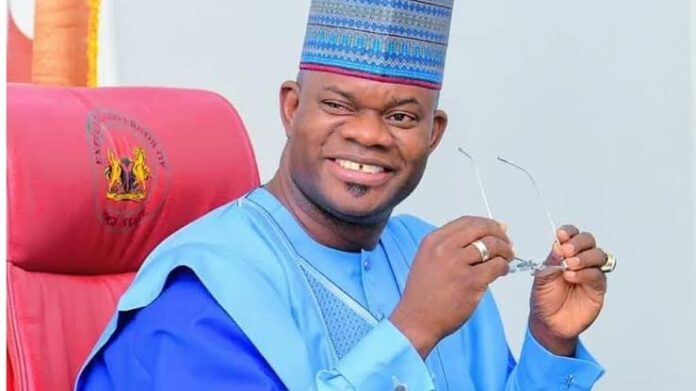 Governor Yahaya Bello of Kogi State, on Friday, kicked against zoning to determine the next President of Nigeria come 2023, insisting that merit should rather be the yardstick.

According to Bello, the 1999 Constitution does not recognize zoning of the presidency.

The Kogi State governor stated this on Friday at the First Annual GYB Seminar for Nigeria’s Political and Crime Correspondents held in Transcorp Hotel, Abuja, adding that equity must be followed if the 2023 presidency has to be zoned.

“Zoning is not recognised in the 1999 Constitution, it’s absolutely, unconstitutional.

“If we must continue with the sentiment of rotational Presidency, it’s okay, but let’s do it right in the interest of equity, fairness and justice.

“Let’s not take it from 1999, let’s go back to 1960. From the Independence, all the leaders we had, you will discover that all other geo-political zones as it exists today at one time had a position of leadership.

“In the 2023 presidential election, let the best candidate emerge who will unify and solve the problems of this country we are facing today, who will build on the legacies of Mr. President. It’s high time the youth take over the affairs of this country.

“I have always led from the front based on equity, fairness and justice. To be a leader, I will say let us be sincere.

“Younger generations are taking charge across the world. It is high time we look for a credible candidate based on merit and not by zoning.

“As the clarion call goes forth for 2023, one can easily discern by events such as this that the Organised Media in Nigeria is already working hard to crack the complex equation of who the next Nigerian President should be.

“All I can say is that in factoring your 2023 equations, please allow yourselves to be guided by national interest to input the following factors: Youthfulness, courage, security, diversity, clear records in successfully managing diversity which is where most post-independence leaders of Nigeria have failed.

“Also very important, the inescapable point of equity, that is, that only the North-Central and South-East Geopolitical Zones of this country have not held the Presidency or Vice Presidency, the two highest offices in the land, since the return to civilian rule in 1999.

“All talks of zoning must be the handmaid of equity or we are merely playing dangerous politics and healing the wounds of the country deceitfully.

“If one is able to develop a genuine love for the people he leads, it becomes even easier to take only those actions that benefit the people every time. This will ultimately help you succeed and also secure your legacy.

“Leadership is, therefore, the means to a lot of potentially awesome ends, but it is not an end in itself. It gives you a platform to do good and effect change. I am determined to give it my best now and in the future.

“The state of the nation today places a burden on us as leaders to act intentionally towards national healing and cooperation.

“Tribe and religion, as we all know, are the major components of our diversity as a nation. They are meant to be our greatest strengths, working together to give Nigeria a wider spectrum of choices and more competitiveness in the comity of nations, and in the human and social indices of national development.

“Unfortunately, we have steadily mismanaged these gifts and they have started turning toxic on us, becoming, for the most part, instruments of exclusion and coercive politics, as well as marginalisation and discrimination.

“The result is a citizenry at cross-purposes and a nation that is practically at her wits’ end.”