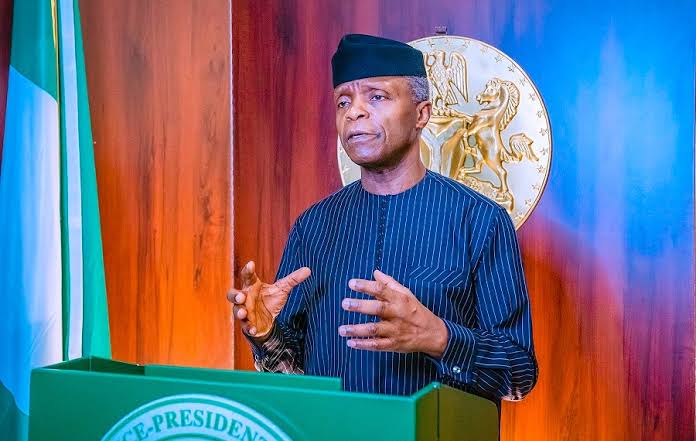 The most anticipated declaration finally came on Monday morning, as Vice President Yemi Osinbajo officially declared his intention to contest for the office of President, Federal Republic of Nigeria at the 2023 general elections.

Osinbajo’s long in coming declaration was the most anticipated because of the controversies that surrounded his then rumoured interest in the Presidency. For many Nigerians, who were more concerned than the principal characters in the unfolding epic drama, it would be utter betrayal and immoral for Osinbajo to contest against Asiwaju Bola Tinubu, his supposed godfather and benefactor.

Though supporters of Vice President Osinbajo have tried to change the narratives, insisting it was because Tinubu recognised the talents and achievements of Osinbajo that made him pick the then university lecturer as Attorney General of Lagos State and Commissioner of Justice. They have also argued that Tinubu never recommended Osinbajo as Vice President, because he too was scheming to be one.

The controversies and arguments notwithstanding, one thing is certain; the contest for the presidential ticket of the All Progressives Congress (APC) will be an interesting one that will provide new lessons for students of political science.

Taking It To Nigerians
Since Asiwaju Bola Ahmed Tinubu made public his intention to run for the Presidency, some patterns had become noticeable by aspirants from the ruling APC.

Though one is almost certain that Osinbajo, before coming public with his intention, already informed President Buhari of his intention to run, he did not not elevate that to the level of priority or undue importance. Tinubu and Ebonyi State Governor, David Umahi gleefully told Nigerians that they have informed the President of their intention to run for the presidency, as if Buhari is the sole decider of who succeeds him.

To men of sound reasoning and judgment, what the duo did was more of ‘idolising’ Buhari and elevating him to some kind preeminent position that says without him, nothing can be done! Smart enough, Osinbajo refused to elevate his consultation with the President in that sense, rather he spoke directly to Nigerians, the people that really matter to his ambition!

An inspiring Broadcast
For the first time in the current gale of declarations, Osinbajo gave cogent reasons why he wants to be president, outlining his vision and what he will do differently, and not dwelling on what Tinubu called a lifetime ambition or what others, especially from the South-East called marginalisation of the Igbos. For him, it was about well cut out vision and programmes, top of which is the ease of doing business and getting government apparatus to work for and make businesses work!

For many who reacted to the broadcast on social media, it was an inspiring one.

There is no doubt that such will resonate with the business community, which has had a taste of what Osinbajo can do in that area, when he acted as President.

A Good Start With Governors
One other thing Osinbajo did smartly was the tactical and strategic meeting with the governors elected on the platform of the All Progressives Congress (APC), the real owners of the party.

In the history of party primaries in Nigeria since 1999, governors have been known to weild so much influence, as they largely control the delegates from the states. They decide how state delegates will vote. So by starting his public consultation from the governors, Osinbajo effectively told them he recognises their importance and would want to work with them.

Notwithstanding the meeting Tinubu had with the APC governors almost 24 hours later, the Vice President already made an important statement and an impressive impact in the psyche of the governors.

With Osinbajo’s declaration, the race for the APC presidential ticket may just have been narrowed to a three horse race between him, Tinubu and the Minister of Transportation, Rotimi Amaechi. How the game plays out and who, among the three, will win the race is just a matter of time!