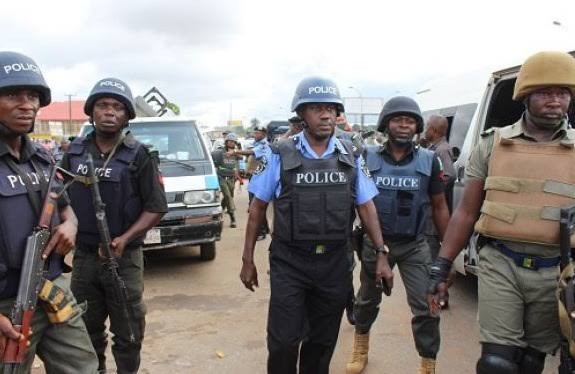 Men of the Benue Command of the Nigeria Police Force has killed about 14 armed bandits in the early hours of Sunday during a gun duel in Katsina-Ala town, Katsina-Ala Local Government Area of Benue State.

According to reports, the armed bandits were said to have met their death when they attacked a police station in the town where some members of their gang were being detained.

Reports further has it that the bandits, numbering about 50, stormed the police station in Toyota Corolla vehicles popularly called ‘duck nyash’ but were engaged by the police in a gun duel leading to the death of 14 of the attackers.

A source said: “We started hearing gunshots around 1:30 am today (Sunday) around the police station in Katsina-Ala town, everybody in the neighborhood was woken up with the sporadic gunshots and praying to God.

“It was around 5:00 am that some leaders in the area visited the station after they had contacted the Divisional Police Officer.

”Surprisingly, the police gunned down over 10 of these bandits while many of them escaped with gunshot wounds. We also heard that two of them were captured alive.”

The spokesperson of the Benue State Police Command, DSP Catherine Anene, who confirmed the development, said 14 of the bandits were gunned down during the attack.

Anene who noted that series of operations were going on in the Kastina-Ala Local Government Area, said the development is aimed at totally clamping down on bandits activities in the area.

She said: “On 19th June 2021 five bandits were arrested and detained at Kastina-Ala Police Division for investigation and prosecution.

“On 20th June 2021 at about 0130hrs more than 50 other gang members of the detainees mobilized and invaded the police station to rescue their counterparts.

“Officers at the division who were already at alert engaged them in a gun duel and were able to subdue the bandits.

“Fourteen (14) of them were brought down during the exchange of fire while several others escaped with gunshot injuries.”

she further stated that security operatives were currently on the trail of the suspected armed bandits who are now at large.

Please Make Me your Number 2, Fayemi Begs Osun APC Delegates Ahead of Presidential...

Your Decision Is Disrespectful, FG Reacts To UK’s Plan To Grant Asylum To IPOB...

May Day: Senate President Commends Nigerian Workers For Their ‘Patriotic Cooperation With Govt’